Captain Whelan cleared his throat before speaking over the intercom.

“Folks, there will be a leave possibility, for those of you who would like to take advantage of the services and facilities offered by the local community. I must however remind you, that all personnel are to report back on ship at exactly twenty-two hundred hours for further briefing. ”

He knew quite well that if, against all odds, any of the crew was still standing at that time, the number of returning crew members would be exactly zero, but it always gave him a fine feeling of command to issue those kinds of statements. He then informally dismissed his crew and retired to his cabin.

It was a colourful mixture of individuals that departed from landing pad, to mingle with the even more mixed and colourful inhabitants of Colon. If there ever in the history of man, had been a more unpleasant place than Colon, it must conveniently have been erased from the annals of history. It was a place so far from the normal workings of society and law that even gravity seemed to have its own special Colon way of working.

The few buildings that made up the town were haste-fully thrown together with scraps found in the ever present rubbish and then apparently left to their own maintenance. The resident population represented a fair collection of lawbreakers, scoundrels, thieves, murderers, kidnappers, pirates, mercenaries and encyclopaedia salesmen. The whole thing could only be described as a kip, build on a dumpsite. But to the men and women living permanently among the towering piles of garbage, it was home. 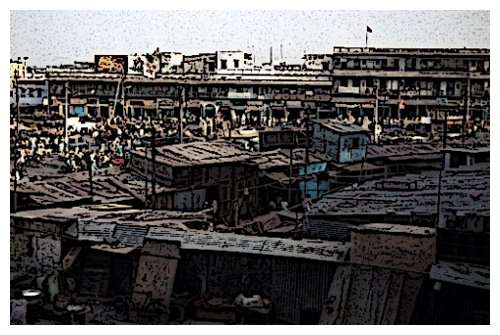 While the crew members headed for the local provider of intoxicating substances, Captain Seamus Whelan sat down to play a game of chess with the ship’s computer. He wasn’t a very good chess player, but the computer wasn’t a very good computer either. A Tamagoshi 9000; evolved from a century old children’s toy and spoiled rotten by the crew in order to get just some kind of useful information in return. Besides that, it was forever in dispute with the Sinclair Demigod navigation computer, to an extent that sometimes prevented the operation of both systems simultaneously and the crew would have to shut down one of them, in order to work with the other. But right now and for a good few weeks, there would be no use for the Demigod. The Bandit was staying put until their little escapade was forgotten, or overshadowed by a new and better crime committed by someone else. Their latest bounty had been good, so they rightly felt they could afford a few weeks’ vacation.

Whelan himself, was a fifth generation space pirate. He had learnt the trade from childhood, cruising the less secure regions of the inhabited galaxy with his father, until the very same father a few years earlier had met his destiny, in the shape of a law cruiser. Seamus had narrowly escaped with the family’s crown jewel; the Bandit, an old one-off design build by his great, great, great grandfather. Being of a progressive nature he had, before embarking on enterprises of his own, sought to expand the family business and improve the vessel of his dreams. The Bandit had undergone a major and quite expensive refitting, new Ramavox 1500 engines, and two four barrelled apocalypse plasma guns to replace the ancient retaliator grenate launchers. Upgrading of the computer systems, to at least last century’s status and hiring a new crew among the trash of the semi-civilised settlements.

The group of people involved in the running of daily business aboard the Bandit was personally selected by Captain Whelan on his many journeys through the inhabited systems. Many a star port joint had been searched and many lawbreaking reports read, before he had been satisfied in his choice of employees. The result showed in the varied selection of characters currently working on the ship, but they were one hell of a crew.

Eric Larson, the co-pilot and second in command, had a history in the Scandinavian space force. He was twenty-ninth generation Norwegian settler, but still bore the characteristics associated with his cold northern homeland. An arch typical Viking, right down to the massive red beard. He was quite large build and seemed to fit only halfway in his seat, next to the more proportioned captain, who had chosen Larson not for his flying skills, which were just above average, but for his powerful determination and his unconditional devotion to whatever plans the captain came up with.

Then there was Jean D’fault, master technician on board. A middle-aged French Canadian with a past in the French astrolegion’s rapid response unit. He was, as opposed to Larson, chosen almost entirely for his champion skills with a Ramavox, or any other form of technical equipment for that matter. But to Whelan’s delight D’fault had proved to possess other talents, much appreciated on board a space ship of their trade.

Hans Rudi Timmermann had been D’faults sidekick and fellow technician from day one.
Nobody, not even D’fault, knew his entire background and there was a fair chance that H.R.Timmermann himself, never had more than a vague impression about it either. He had, in his youth, apparently experimented with just about every mind altering, or even slightly hallucinogenic substance in the pharmaceutical handbook. Leaving the mature Timmermann, none the wiser in the administration of chemicals, but forever embarked on some kind of surrealistic trip through a world that, even if it apparently took place in the same positions in space, must have been mindbogglingly far apart from what everybody else seemed to experience. All things apart, he got his job done and D’fault wouldn’t want to be without him. 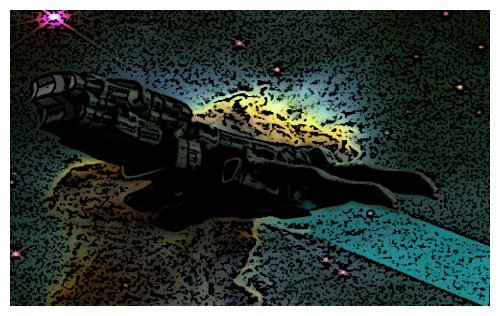 The Bandits navigator Yakuta Katana was educated at the Imperial Japanese Space Flight Academy, he had attended all four years of training, before failing his final examination due to an inherited, and rare, variant of vertigo, plus an almost non-existing grasp of four dimensional space. He had done the only decent thing he could think of; forged his papers and taken hire on what he thought was a private ship, but had in fact turned out to be a pirate ship. From then on his Japanese pride had prevented him from correcting his mistake and he had become a valued part of the Bandit’s crew. Katana, although initially opposed, had soon taken a liking to the ship and her crew. Life as a space pirate might not have been his lifelong ambition, but it did give him amble spare time for his three major hobbies, Origami, Bonsai and Haiku poetry. Right now his Captain, Seamus Whelan, promised him weeks, or months of paper folding and tree cutting, if only he would get them down at that spaceport.

Manuel Anzana was the latest edition to the crew. They had picked him up after deciding, that since business was booming, they could afford to have a designated Loadmaster and arms operator. Manuel just happened to be at the right place at the right time and that had been a seedy cantina in the Spanish sector of quadrant fifty-four B, a little over eight months ago. He was a born adventurer, from a full-blooded Castilian family of surprisingly good reputation. He had been the black sheep and taken to space as soon as he saw his chance. Riding on that chance he had spend a decade cruising the galaxy, working only where and when he felt economical reasons for it. Now the Bandit had become his home and the crew his family, so in a way he was still the black sheep, now just in a herd of dark grey fellow sheep.

Whatever colour or background the members of this ship born family had, they all had at least two things in common, they were all professional career privateers and all shared the limited office space on board the Bandit.